For many years now I’ve been using Gillette razors, they work well and give a consistently satisfying result, but every time I need to buy new razor blades I wonder if there could be a cheaper alternative as even with the bulk-buy blade packs it doesn’t seem like I’m getting my money’s worth, and they always force me to buy a new handle in the packs too which feels like a waste, the Gillette handles are fairly bullet proof and could potentially last for years.

After reading a few comments and reviews online I decided to conduct my own tests, starting with the Sainsbury’s own-brand 6 blades ‘advance system razor with trimmer’ (do not be confused by this and think that it comes with six blades, it contains just one cartridge that has six blades in it), the comparison will always be with the Gillette Fusion ProGlide FlexBall which is what I normally use – the pack I buy is usually from my local Superdrug shop – https://www.superdrug.com/Gillette/Gillette-Fusion-ProGlide-FlexBall-Razor-Plus-9-Blades-Pack/

Side-by-side the razors look similar, with a rubber strip along the bottom and a moisturising strip across the top, and a metallic strip down each side; the main differences are six slightly thinner blades in the Sainsbury’s vs five slightly wider spaced blades in the Gillette, and the FlexBall in the Gillette.  Both have head tilt and a cartridge quick-release button. 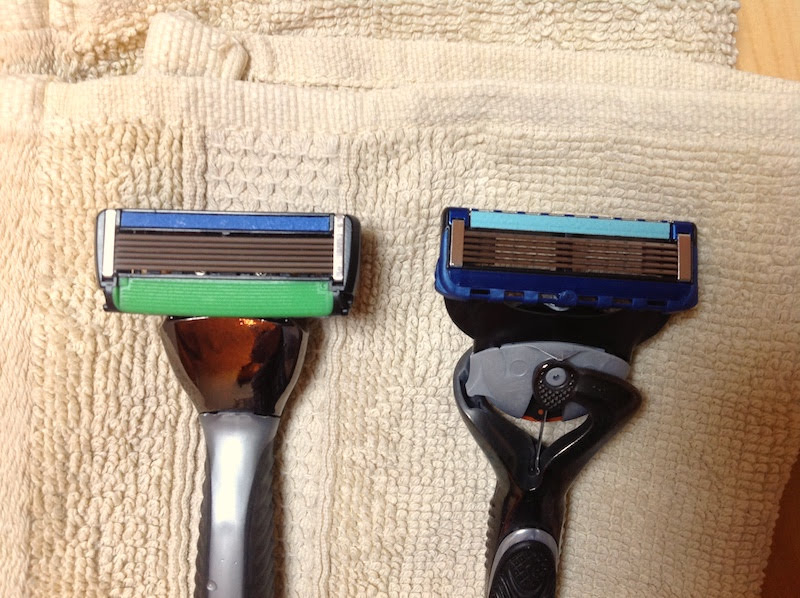 Starting on a Monday morning from approximately three day’s beard growth, I used Morrisson’s Sensitive Shave Foam and shaved the right side with the Gillette then the left side with the Sainsbury’s, following my usual method.

Both razors did a fine job of clearing away the weekend’s growth, neither snagged or pulled my hairs, no cuts or scrapes, the beard trimmer on the Sainsbury’s worked well to get those tight hairs around the nostrils, by the end of the shave I really could not tell the difference in terms of closeness or finish.  My only observation would be that the Gillette was slightly easier to rinse than the Sainsbury’s, probably due to the wider spaced blades, but had I not had the Gillette for comparison I doubt I would have noticed or cared as the Sainsbury’s was still easy to rinse.

As for the FlexBall, I hardly noticed the difference in feel between the two razors, the Sainsbury’s did feel slightly more rigid but it didn’t seem to affect the shave experience or results.  A gimmick?  Perhaps.  Worth paying extra for?  Probably not.  At the end of the day it’s personal choice, the Gillette may suit some people far better than own-brand offerings, but from my results so far I’d say there’s definitely a good potential for saving a few quid by using the Sainsbury’s advance system razor.

I will now use the Sainsbury’s razor to see how long the cartridge lasts before it starts to rip my face off, then compare this to the Gillette cartridge which I will use after that.  Check back here in the comments for the results in a week or so!

I am the owner of this blog and domain. I usually don't bite unless provoked.
View all posts by Jonathan →
This entry was posted in Reviews and tagged advances system razor, fusion proglide flexball, gillette, razor, sainsbury's. Bookmark the permalink.

1 Response to Sainsbury’s Razor vs Gillette